A 17,000 year old aboriginal rock painting has been discovered in WA’s Kimberly region, and has been identified as the oldest intact rock painting in Australia.

The two-metre-long painting of a kangaroo was discovered along with 15 other similar paintings by researchers from the University of Melbourne.

The images, were dated by using radio-carbon dating on mud wasp nests covering the painting. 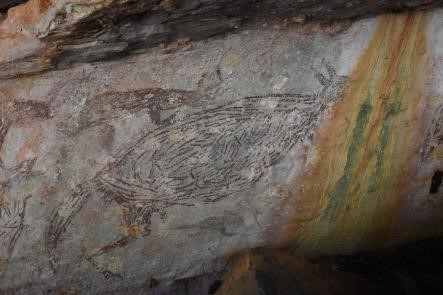 Archaeologist Sven Ouzman told 6PR’s Gareth Parker the rock art is being used to explore the lives of Aboriginal people.

“This is the time of the ice age, so the fact that people were making rock art shows they are not just surviving they’re thriving,” he said.

“It’s amazing, and it’s just another bit in the puzzle in telling the large story of the continent.”

The kangaroo is painted on the ceiling of a rock shelter in Balanggarra country, in the north-eastern Kimberley.

“It’s not the oldest rock art in Australia, it’s the oldest one still in a rock shelter.”