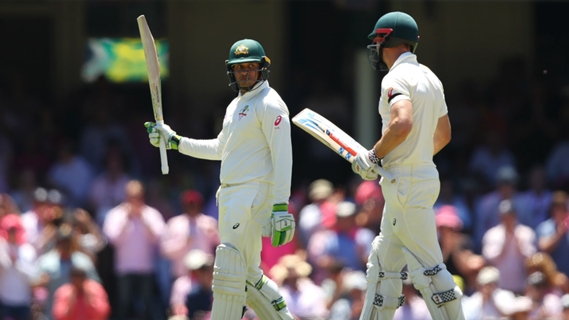 Australia are in command of the final Ashes Test, leading by 133 runs at 479-4 after Usman Khawaja and Shaun Marsh piled on the runs.

Usman Khawaja scored his first Ashes century and Shaun Marsh was two runs short of a hundred at stumps as Australia made England suffer in the heat on day three of the fifth Test at the SCG.

Khawaja’s place in the Australia side has been called into question, but the number three made a magnificent 171 before he was stumped off debutant Mason Crane (1-35).

Moeen Ali (1-125) got the prized scalp of Steve Smith, caught and bowled for 83, but they were the only two wickets to fall as the Marsh brothers, Shaun and Mitchell, were unbeaten on 98 and 63 respectively to see Australia through to 479-4 – leading by 133 and well on course for a 4-0 series win.

Crane thought he had Khawaja leg before just after Smith fell before lunch, but the leg-spinner spinner was adjudged to have over-stepped after the tourists called for a review – which also showed the ball would have struck the stumps.

– Khawaja makes a sixth Test hundred in a stand of 188 with Smith before the Marsh brothers combined for an unbroken stand of 104.

– Moeen removes Smith with only his fourth wicket of the series and Crane finally gets rid of Khawaja, reward for a promising Test bow so far.

– A pitch offering an increasing amount of turn will have Nathan Lyon licking his lips, with Australia firmly in command and on course to finish a series they have dominated on a high note.

MOMENT OF THE DAY

Crane was sure he had seen the back of Khawaja for 132 just after Smith had departed before lunch, but the 20-year-old tweaker had to wait for his maiden Test wicket.

After Root called for a review when the left-hander was struck on the pad striding forward, a not out decision would have been overturned if Crane had not been punished in a marginal call.

Replays show that Mason Crane would have had his first Test wicket had he not overstepped.

DRS would have had the decision overturned. #Ashes

LYON TO THE FORE ON DAY FOUR?

Australia will be scenting victory on day four, the Marsh brothers eyeing hundreds as England brace themselves for another tough day.

Lyon will be rubbing his hands together at the prospect of bowling on a surface which should make life very tough for England against the spinner, while the Australia quicks have had plenty of time to put their feet up as they attempt to do more damage.