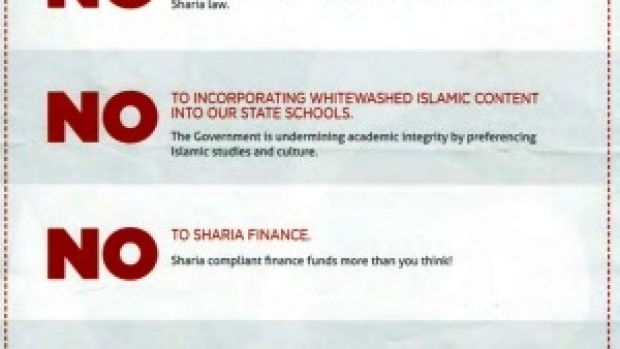 In a perverse way the Government’s response to the hepatitis A/frozen berry contamination issue has dealt a harsh blow to the groups campaigning for less food labelling.

The more information food labelling gives, the better informed consumers are to make their own choices, it really is a no-brainer.

So for now, let us put the general labelling issue to one side and focus on the anti-halal food labelling campaign.

Mixing food labelling and others’ religious beliefs inflames some people, however to date, not a skerrick of evidence has been publicly produced to validate the wild claims being made.

There are defamation proceedings in the NSW courts that constrain what I can say, but it is fair to ask, what the fuss is all about and I admit to having trouble understanding the problem.

In a similar fashion to heart, nut and vegan markings, certifications inform us a product conforms to someone’s requirements.

There is nothing added to foodstuffs, there is no ingredient that secretly turns you Muslim, nor are there any idols or religious symbols secreted in your lamb chops.

Generally, halal means animals have been slaughtered in a certain way and all foodstuffs are prepared in what can be loosely described as a pork and alcohol free environment.

The cost of the labelling is so low it is almost incalculable and the major benefit of the certification is that it allows our foods to be exported to almost a quarter of the world and into our major food markets.

For me, that alone justifies certification.

A domestic consumer may be looking at two packages with exactly the same contents, when it is marked they get a choice, if it isn’t, they don’t.

Even if you are devoutly anti-Islamic, and I am not, surely you are better off knowing than not knowing?

As I said, I find it difficult to understand the problem.

So who, or what – is driving all of this?

Finding hard information is difficult, there are poorly informed, attention seeking pollies rabbiting on, but the major protagonists go by the name of the Q Society, who have been distributing pamphlets in WA.

They associate with a group called Halal Choices and then it all gets a bit messy because there are many websites like this one that have a lot in common with Australian sites.

These websites appear to be United States based fringe groups who are followers of another religion born in the Middle East, Christianity.

The common link appears to be an organisation called Wilderness Christianity.

The ABN and server details of these Internet groups have all changed recently, making it harder to tell who is actually driving it all, however there is little doubt that it revolves around US-based internet servers and the bigotry that fundamentalists revel in.

In middle-of-the-road Australia, when emotive issues like this come up, the general public is usually calmer, wiser and quieter than the bigots and the census statistics for religious preference confirm this trait.

Examining the ABS data makes two things clear: Australians are losing interest in religion and in even worse news for propagandists – Islam is a minor religion in our nation.

I was genuinely surprised to find that the Islamic faith makes up a mere 2.2% of the population. There are more Buddhists (2.5%), the Hindu religion is growing faster and interestingly the statistics reveal that all non-Christian religions only constitute a tiny 7.2% of Australians.

More tellingly, the fastest growing group is that with no religious affiliations, who make up 22.3% of the population. This group is the second biggest identifiable group after Catholics.

Those numbers are not reflected in heat, and headlines are being generated on what is a relatively minor issue. To make this issue more divisive, these particular groups’ views on halal food-labelling are not supported by some of the other religious groups.

In Federal Parliament, the MHR for Cowan, Luke Simpkins, presented a petition that was raised by the Christian group, the Barnabus Fund. The petition called for increased food labelling to address their concerns over halal food.

"Meat killed in accordance with the Islamic religion’s requirements should be labelled accordingly.  By having Australians unwittingly eating halal food we are all one step down the path towards the conversion, and that is a step we should only make with full knowledge and one that should not be imposed on us without us knowing."

Because I am religion free, pretty good on the tooth and one who enjoys foods from different countries, that bewildering claim grabbed my attention.

What if "unwittingly eating" a particular sort of food really does impart involuntary changes in people? When eating a pizza, will I become Roman Catholic and speak Italian?

What if unwittingly eating roast beef and yorkiepud made me barrack for the Poms in the cricket, or if eating one of Tony Scarfo’s purple sausages turned me into a Dockers’ supporter?

Perish the thought, but if Milo Kerrigan, aka Shaun Micallef, put all this in a TV comedy sketch, viewers would fall about laughing.

And so we should, because it really is a bit silly.